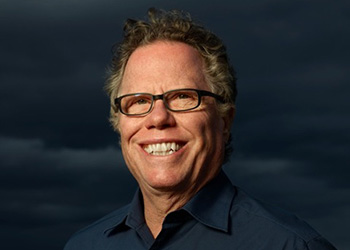 Jack Handey is indeed a real person. Although he is friends with Al Franken and has worked with Steve Martin, he is the sole author of “Deep Thoughts.”

Handey was a staff writer for several years on “Saturday Night Live,” where he penned such sketches as “Toonces, the Cat Who Could Drive a Car,” “Unfrozen Cave Man Lawyer,” “Happy Fun Ball,” “Anne Boleyn,” “Deer Heads,” “Robot Repair” and many others.

For his writing on “SNL” and other comedy shows, Handey has won two Emmy Awards and a Writers Guild of America Award.

He now works as a freelance writer. His most recent book is a comic novel, “The Stench of Honolulu.” He also contributes humor pieces to The New Yorker, Outside magazine and other publications. His 2008 book, “What I’d Say to the Martians,” is a collection of such essays.

After many years in New York, he now lives in Santa Fe, New Mexico, with his wife Marta and dog Ruby and cats Romero and Perkins.

He hopes you enjoy his web site.

When he was editor of his high school newspaper, Jack wrote a humor column called "Witty Words to Whittle By."